Blustery windstorm knocks out power to tens of thousands overnight An incredibly strong, blustery windstorm – with gusts over 59 MPH – whipped through the region overnight, knocking out power to well, most everybody in south King County.

The National Weather Service said that peak wind gusts occurred between midnight and 1:15 a.m., and that’s when most power went out, most likely due to falling trees and branches.

Seattle City Light says that power won’t be restored to most customers until around 8 p.m. Wednesday night. As of 11 a.m., City Light said that over 41,000 customers were still without power, down from a peak of 72,000. 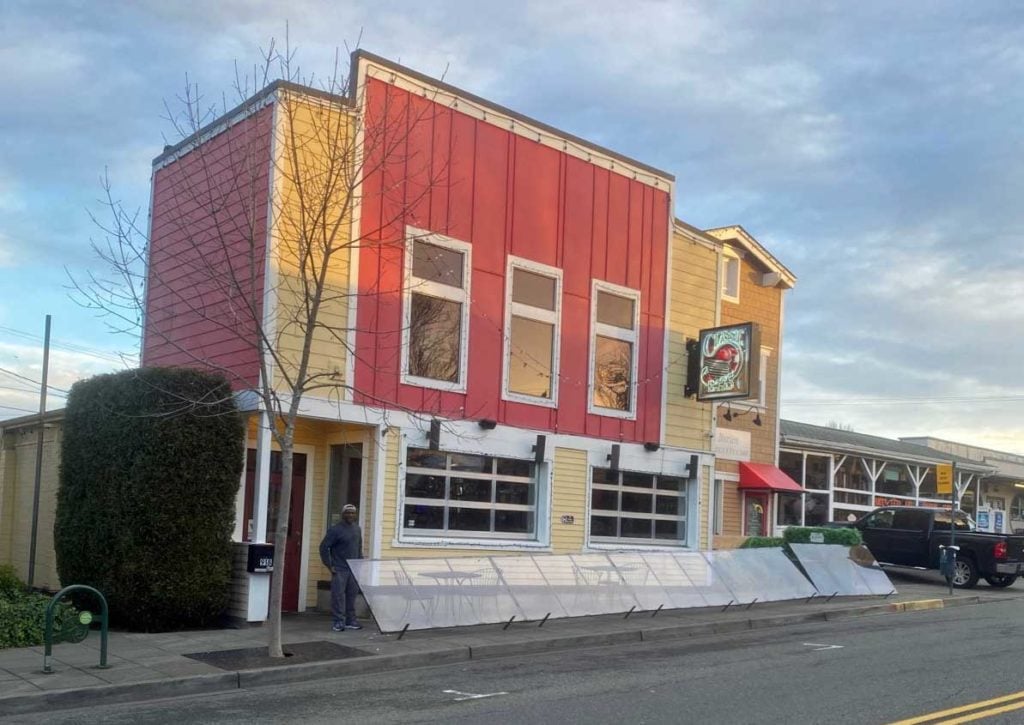 The awning on Classic Eats in Olde Burien was blown down. Photo courtesy John White.

Due to the power outage, several businesses are either opening late or are closed for the day.

Friends, due to a power outage, we will be closed today at our Burien location until further notice. Thanks for understanding! pic.twitter.com/TwZ4GmW7xH

A look at peak wind gusts that occurred between midnight and 1:15am. Note: gusts of 50-59 mph occurred on the coast prior to midnight. #wawx pic.twitter.com/HQ3ZdPZ6CD

If you slept through the winds last night, well a lot went on. Widespread power outages remain this morning. There's a ton of downed trees & debris on the roads. If you need to head out before prepared for these hazards & dark intersections. If you can stay home, do it! #wawx

Here is how our radar on Camano Island visualized the strong surge of westerly wind down the Strait of Juan de Fuca between roughly 1130 PM and 1230 AM. Whidbey Island gusted to 64 MPH at 1249 AM and Smith Island 68 MPH a minute later. #wawx pic.twitter.com/s8zUF3Ak3k

We are aware that multiple traffic lights are down in the region due to power outages. When a traffic light is inoperable, treat it as an ALL WAY STOP. 🛑
Full outage map at https://t.co/hXuWXKjCWK.
DO NOT drive through standing water. Be Safe pic.twitter.com/sAWFMJ8zT8

It’s garbage day for us and total carnage of the neighborhoods bins all night. Poor Burien! pic.twitter.com/u4EVqvStKT