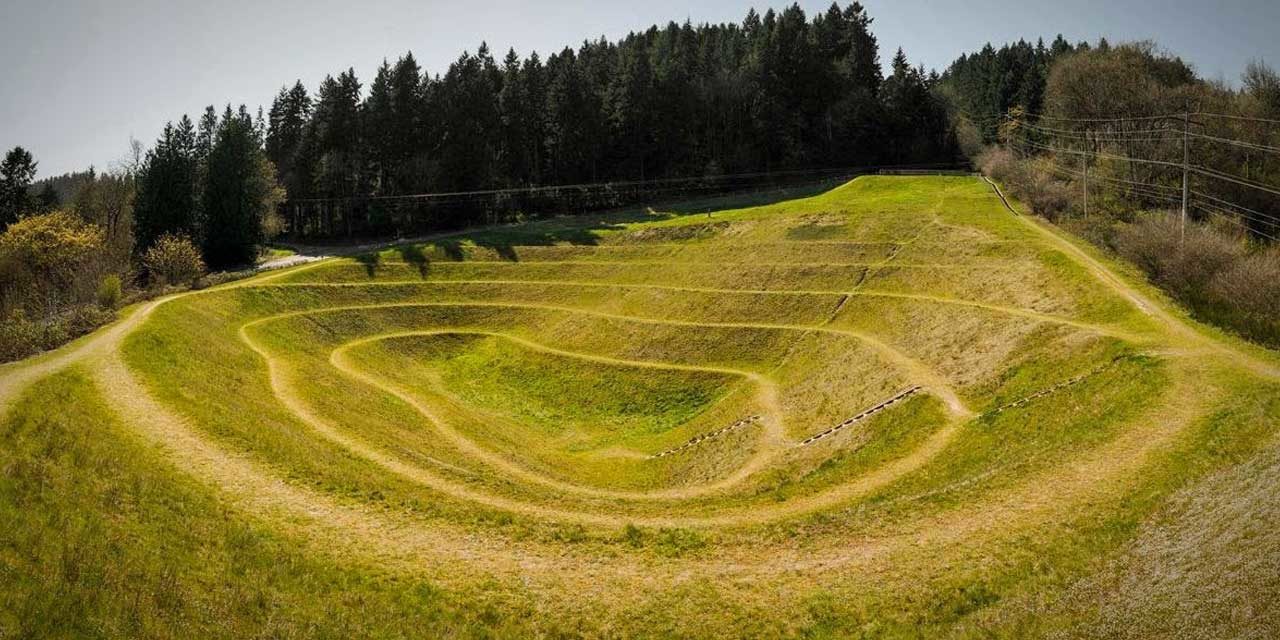 Robert Morris’ celebrated Untitled Earthwork (Johnson Pit #30), located in SeaTac and one of the first ever publicly-funded Land Art projects, listed in the Washington Heritage Register in June 2021, is now on the National Register of Historic Places.

On the heels of this honorary designation, the large art installation was noted for “significant contribution to the broad patterns of history,” embodiment of “distinctive characteristics,” and “high artistic values.”

A contemporary earthwork has never received such status, according to 4Culture.

Houser notes that the listing is one of the most unusual in Washington from a variety of perspectives. “Listing a property less than 50 years old is quite special, and this is the first project in the United States to use funding from a 1% for Art program for arts-based environmental reclamation. The nomination will set precedent for others to come.”

Pajek, Public Art Director at 4Culture, adds “Acknowledgement of Untitled Earthwork (Johnson Pit #30) on both a state and federal level is such an important step to not only recognize a treasured work of public art in our region but to also protect the vision of Robert Morris. During these times of rapid development and environmental change, it is crucial to preserve spaces like this for future generations.”

Inspired by early efforts to use art as a means for rehabilitating abused post-industrial sites, 4Culture‚ then known as the King County Arts Commission‚ sponsored an innovative symposium called Earthworks: Land Reclamation as Sculpture in 1979. It was a remarkable and timely vision attuned to the local problem of abandoned gravel mines, the national Land Art movement, the regional ethos of environmentalism in design, and the national focus on the environmental impacts of mining and mine reclamation.

The Commission brought together a unique team of government agencies and artists to discuss the potential of earthworks—large-scale sculptures that use the earth itself as their medium—and to create historic public artworks designed to restore natural areas damaged by industry.

Robert Morris received the first demonstration project commission. He removed undergrowth from an abandoned 3.7-acre gravel pit in the Kent Valley, terraced the earth, and planted it with rye grass, in effect returning the land to active use. Decades later, the destination continues to serve as a community gathering place.

Anticipation and response to the symposium in the national arts and landscape architecture press expressed excitement and cautious optimism over its premise. It was described by Artforum as “a project of major public dimensions” and Untitled Earthwork (Johnson Pit #30) was hailed as “the most ambitious Earthwork project this country has ever seen.”

Today, in addition to proving the effectiveness of art as a reclamation tool, we can see how Morris’ efforts and those of the consortium helped establish the viability of public art as an answer to public infrastructure challenges and lay the groundwork for what is now a standard practice of including artists in the development and planning of public spaces.

Robert Morris
Morris was born in Kansas City, Missouri in 1931. He received an education in engineering from the University of Kansas, studied art at Kansas City Art Institute and California School of Fine Arts in San Francisco, studied philosophy at Reed College in Oregon, and took a break from school to serve in the Army Corps of Engineers.  After college, Morris spent several years living in San Francisco before moving to New York City in 1959 and receiving a master’s degree in art history from Hunter College in 1963. His early explorations of painting, dance, and choreography would influence the sculpture, earthwork and performance work for which he received most of his acclaim. Morris’ particular interest in Land Art was rooted in perception, the carceral, the phenomenological, and ancient form making and symbology.

Over his career, Morris had solo exhibitions at numerous major museums including the Whitney Museum of American Art in New York (1970), the Art Institute of Chicago (1980), the Corcoran Gallery of Art in Washington D.C (1990) and a retrospective at Solomon R. Guggenheim Museum in New York in 1994.  His writing is equally influential to his visual work, and a series of essays produced in 1966 for ArtForum magazine entitled, “Notes on Sculpture,” remain a foundational critical text within the field. Likewise, Morris’ 1993 publication Continuous Project Altered Daily compiled several influential writings on sculpture including a version of his keynote address for the symposium. At the time of Morris’ death in 2018, Morris was living in Kingston, New York and new work of his was on view at the Leo Castelli Gallery in New York City.

Morris’ involvement in Land Art had its formal beginning over a decade before the King County Earthworks Symposium, with his 1966 proposal Project in Earth and Sod for the Dallas Fort Worth Airport. The work was not built, but Morris continued exploring this conceptual practice with a series of sketches, proposals, and participation in the major Land Art exhibitions of the time. Of the work Morris was generating, three large-scale earthworks were constructed.  These works included Observatory in the Netherlands; Grand Rapids Project ‘X’ in Michigan; and Untitled Earthwork (Johnson Pit #30).

Untitled Earthwork (Johnson Pit #30) is the only large-scale Morris earthwork in the United States that has been well-maintained close to its original form and condition. 4Culture remains its steward and King County Roads Services Division owns the land.

Living as I do in an age deprived of the gods and numbed by the ironically entropic consequences of our own technology, my work can hardly be construed as celebrating either the transcendent or the industrial. But as this work is publicly funded, people whose tax dollars went toward its construction will demand to know how, failing the act of celebration, the work justifies the expenditure of the money and effort. Some of them will at least want to know what it ‘means.’ To this I can only reply that the distinctive difference of art, what marks it off from all other organized human activity, is that it does not seek control through explanation. That it offers the freedom to experience and question is not an opportunity that its audience always welcomes. But the value of the present work, if any, will have to be sought on these terms. – Robert Morris