The National Transportation Safety Board on Tuesday, Sept. 3 issued a preliminary report for its ongoing investigation into the fatal transit shuttle bus crash that killed one in SeaTac on July 25, 2019:

One bus passenger was killed and nine people were injured when a 2019 Ford 350 HD Transit shuttle bus, operated by Town Park LLC, was struck by a 2001 BMW 325i passenger car. The BMW was traveling south in the left lane of International Boulevard, approaching the bus which was traveling north in the left lane of International Boulevard while transporting passengers between Seattle-Tacoma International Airport and a nearby hotel. There were eight passengers and a driver aboard the bus and the only occupant of the BMW was the driver.

As the BMW approached the shuttle bus, the car veered to the left, crossing the left-turn lane and center median. It entered the northbound left travel lane and collided with the left side of the shuttle bus, just behind the driver’s door. The bus rotated counter-clockwise and rolled 90 degrees to the right, coming to rest with the front of the bus on the center median and the passenger side on the pavement. 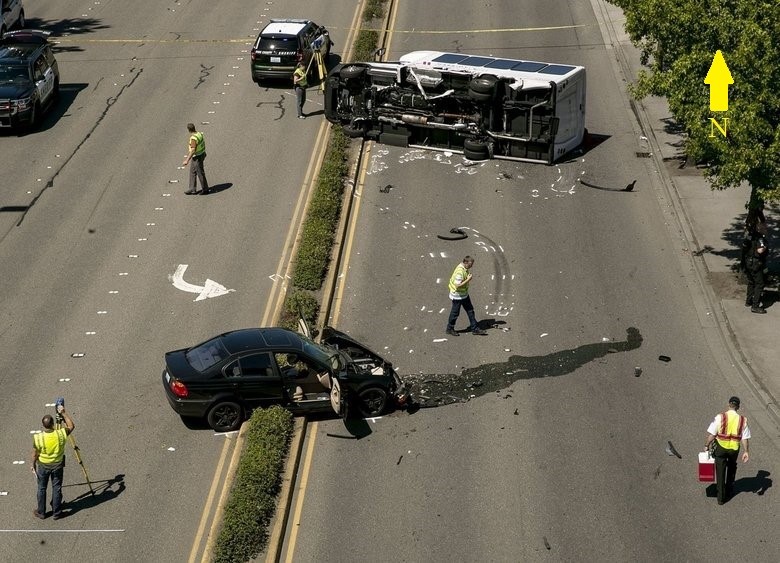 The final rest positions of the transit shuttle bus and passenger vehicle involved in the July 25, 2019, crash on International Boulevard, SeaTac, Washington, are depicted in this photo. Photo courtesy of Erika Schultz, Seattle Times

The bus was equipped with lap belts for all 14 passenger seats, but none of the eight passengers were wearing them. The bus passenger who died was partially ejected in the crash.

The NTSB sent two investigators to SeaTac, Washington, where they worked on-site alongside the King County Sheriff’s Office and the Federal Motor Carrier Safety Administration for five days. The FMCSA and KCSO, both of which are parties to the NTSB’s investigation, are conducting separate investigations into the crash.

Information contained in the report is preliminary and subject to change as the investigation progresses. As such, no conclusions about the cause of the accident should be drawn from the preliminary report.

The preliminary report is available online at https://go.usa.gov/xVkkt.